PeerDoc is a collaborative real-time rich-text editor with undo/redo, cursor tracking, inline comments, permissions/sharing control over documents, a change history. Things you would expect from a modern collaborative editor on the web.

But the main difference is that it combines two types of collaboration: 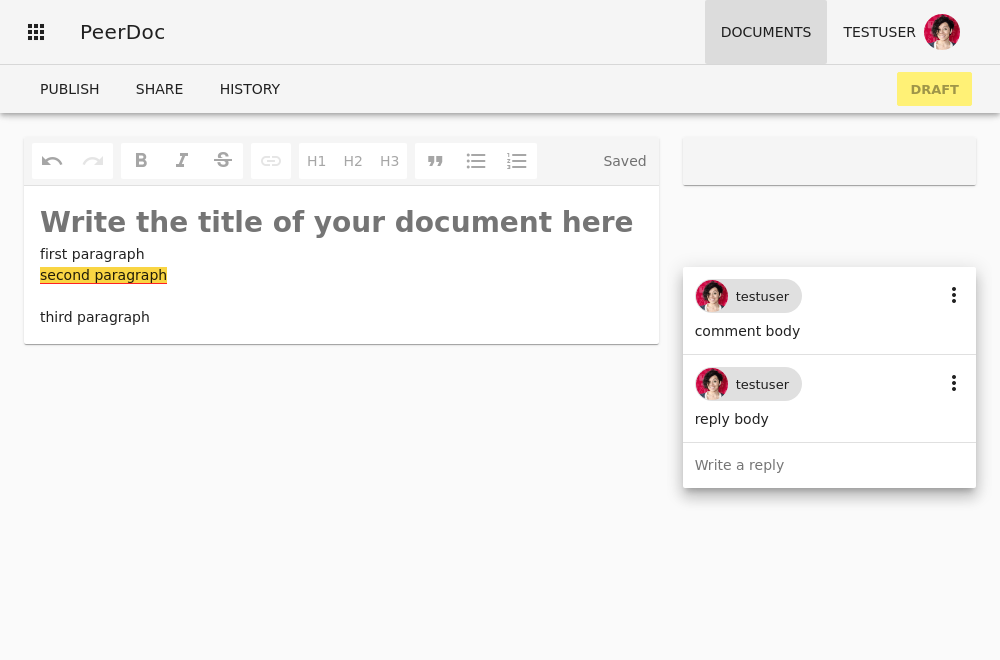 Push-based collaboration is collaboration where a change can be made directly (pushed). Google Docs and Wikipedia (and wikis in general), for example, work this way by default. If the change is deemed problematic by others, it can be reverted or further changes can be made to fix the problems.

Pull-based collaboration instead works by offering a change that must be approved before it is integrated (pulled). GitHub has popularized this model through its pull-requests (which GitLab calls merge-requests because integrating a change is called merging). 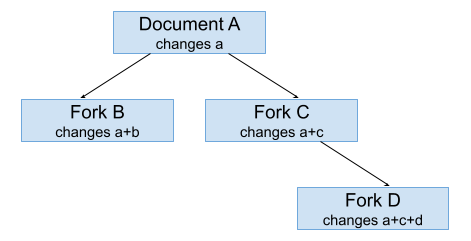 PeerDoc uses the great ProseMirror library for its editor, which already includes features for real-time collaboration. For a single document this works great, but making things work across a tree of documents requires a precise cross-document sharing of changes.

When a change x in Document A is made, it is made after all existing changes a: 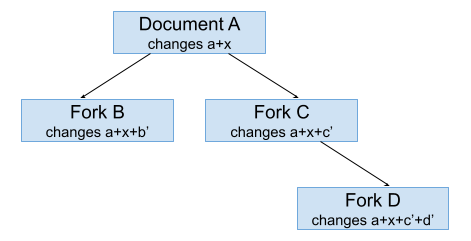 Merging a fork into the parent document is easier. First, we have to make sure all parent changes are propagated to forks. Then, merging is simply adding additional changes to the parent document. For example, merging Fork B into Document A would mean that we add changes b’ to changes a + x, making Document A have the same content as Fork B (until another change to Document A). Merging changes Document A, so now we have to propagate changes b’ to other forks, i.e., Fork C (and in turn Fork D).

This explains what is happening on the server-side. Client-side also has to adapt to these changes. For example, an editor which has Fork D open and displayed it is showing changes a + c + d + y, where changes y are local changes the editor might have and have not yet been send to the server-side. When server-side propagates change x and then sends updated Fork D to the client-side, the editor has to update showing changes a + c + d + y to changes a + x + c’ + d’ + y’ while preserving any other editor state. PeerDoc does not yet implement this and just resets the editor.

As you can see, cross-document sharing of changes can be very active. Changes can be small (e.g., the user adds an extra character to Document A in real-time, which then propagates to the forks) or large (e.g., the user merges a large set of changes b’ into Document A, which then propagate to the forks). All of this not only puts a burden on the server, but can also confuse users, since large chunks of content can be changed while they are editing the document. Moreover, the interaction with existing changes (e.g., the interaction of changes b’ with changes c’ after changes b’ have been merged into Document A and propagated to Fork B) can sometimes be surprising. All conflicts between changes to the same section of the document are resolved mechanically, without regard to how a human understands the content. When editing in real-time, this is fine because editors can usually observe and adjust to the results of conflict resolution in real-time (e.g., “Oh, I got pushed into a bulleted list by another user, let me get out before I type more.”). Furthermore, conflicts tend to be small anyway. However, when mechanically resolving conflicts for larger chunks of content, this can lead to surprises and require followup fixes.

When we think about collaboration, we also need to think about the process and the goal of collaboration. Who can edit and when, and in the context of PeerDoc, who can edit and when in real-time, and who can edit and when using forks and merges. One approach is to decide this based on trust between users, and edit in real-time if they have high trust, and edit through forks and merges if they do not. But if the collaboration is part of a wider community, we may need more control over when something can happen. For example, should any editor of the parent document really be able to approve the merge request, or should there be a process for that? After the merge, can the parent document editors continue to edit the document directly, possibly modifying the just merged (and community-approved) change?

PeerDoc supports being embedded inside another tool, which can then control the collaborative process more precisely. Moreover, it can operate in two different modes. In one mode, documents can be forked and merged at any time, and editors can still edit documents directly. In the other mode, documents can be marked as published and only then can they be forked and merged, but they can no longer be edited directly. The idea is that editors can directly edit the document only while it is not yet published (it is a draft). Then they publish the document and others can see the document, fork it, edit the fork in real-time, and then suggest changes that can be approved or rejected by the editors of the document.

PeerDoc has been used by The Federal University of São Paulo, Brazil, to write their 5 years strategic plan allowing everyone at the university to collaborate and contribute. It has been used integrated with AppCivist which guided the community through multiple phases of participation.

Collaboration is not easy

PeerDoc does not have all the answers (yet) about how exactly to best use a combination of these two types of collaboration. Are forks created by working groups that meet and collaborate and then propose changes to the main document? How are the proposed changes approved? Does an editor of the parent document make a decision or is there some other decision-making process, e.g., voting? What happens if a change is not approved? Does the community vote to choose between the parent document and a fork? Or is the fork published as an alternative document? Or is it simply forgotten? Is PeerDoc used as-is, or is it integrated with another application that can help organize the community and coordinate the process? PeerDoc currently rebases all changes and maintains a linear history of all documents, but would a branched history without rebasing be better when trying to understand how documents came about? Can one effectively proceed in followup fixes of poorly resolved conflicts without having access to both versions (parent and fork) of the content prior to the merge, or is it sufficient to see only the (poorly) merged result? More experimentation is needed to answer these questions. Try it out and please report your experiences.